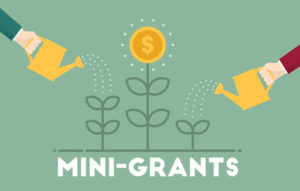 Three years ago, Grayson LandCare changed its structure from four Standing Committees (Forestry, Livestock, Water/Energy, and Communications) to a project-based focus. The projects that were naturally arising from our members did not fit neatly into the Committee categories, and we realized they didn’t need to! So we looked at the activities that were thriving and engaging groups of members, such as permaculture, recycling, and the Farmers Market and focused on supporting those initiatives. We also wanted other members with strong interests to be able to start a new project, and we came up with the idea of giving them some seed funding (a “mini-grant”) to help them get it off the ground.

Here is the process we developed: We asked that anyone who wanted to work on an issue that fits with our mission give a brief “Ted talk” to the membership and pitch the idea, asking for others to join them. If a small group is willing to work on it, they can complete a simple application to ask for a one-time mini-grant from the Grayson LandCare budget. They will need to specify expected outcomes, specific goals, and how the money will be used. To date, we have capped these at $500 maximum. The Executive Committee (officers) reviews the applications and votes. The group is also asked to keep the Executive Committee informed of their progress.

A couple of examples may be helpful. Rob Meinecke wanted to plant live stakes along his riverbank, which was badly eroded and consulted the New River Conservancy for advice. Chelsea Blount replied that she would be glad to help him and others in our area with the same need. Rob planned a workshop and rounded up neighbors who also needed stream bank restoration. Then he applied for a mini-grant to purchase enough live stakes for the group. The workshop was very successful, and several people learned how to plant live stakes along their banks for maximum effectiveness.

Kathy Cole shared a long-time dream of setting up a “free store” where items headed for the landfill would go to new homes where they would be re-used, or re-purposed. With feedback that this was indeed a feasible idea, she applied for a mini-grant to jumpstart the project and make it a reality. The Free Market is now off and running!

We have had requests from people not associated with Grayson LandCare for mini-grants. Perhaps our use of the term “grants” has been misleading; most grants are given by the organization to people outside the membership who apply in response to an announcement of available funding. However, this program is just for you, our membership, to give you a boost if you think there is something we can do to help our community and you are willing to lead the effort.

The idea of LandCare, which has spread around the world, is to empower citizens to define their own problems and find their own solutions. It is your energy and creativity that makes us an asset to the community. So let us know if you have an idea that you would like to plant, nurture, and grow!